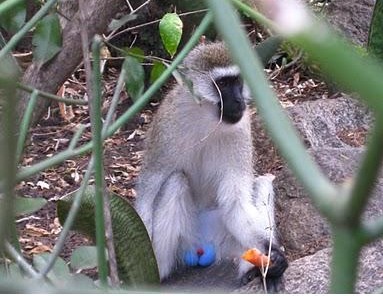 Asante Sana means “Many Thanks” in Swahili (sana = very)

“Asante sana squash banana, Wewe nugu mimi hapana” is what the baboon Rafiki sings in the Lion King movie.  The line is translated to “Thank you very much, squash banana.  You are a baboon and I am not” (wewe = you, nugu = babboon, mimi = I, hapana = no).  I would say it randomly throughout our trip whenever I saw a monkey.  I later learned that the phrase is part of an old nursery rhyme in Swahili, and did not originate from the Disney movie haha.

During breakfast at the hotel, there were several aggressive monkeys hovering around the restaurant and one sneaky monkey almost made off with a guest’s bag before Mital shooed it away.  Mital told us that when he was younger, he used to make slingshots to shoot rocks at the monkeys to scare them away.  I thought that was a bit cruel to hear about until I had my own personal encounter with attacking monkeys later on safari… we had to brandish sticks to ward them off!

We left the resort early in the morning to head back to Mombasa. Mital had recovered from his ailment,  and it was Roza’s turn to feel sick. We found a matatu to drive us to the ferry, and I learned the equivalent of the “stop button” for this shared taxi van was simply slapping the inside of the car to get the driver to stop.

During the ride to the ferry, I noticed there were broken glass shards glued to the top of many stone walls.  Compared to barbed wire, this was a cheaper yet still effective security system.

We had lunch at Mital’s house with his parents and enjoyed some delicious Gujarati cuisine.

While Mital and Roza rested at the house, the rest of us went to check out the Akamba Handicraft Market.  Akamba is a large warehouse of local handicrafts, and we browsed through the wooden carvings and other souvenir trinkets.  Miraj said prices would be a lot cheaper at the Maasai Market in Nairobi, so we decided to just window shop to get an idea of what we wanted to buy back in Nairobi.

Miraj stopped by his relatives’ house, and we drank some chai as we talked to his family.  The living room had a cool swing chair in the middle and we all took turns posing as couples on it.

Later that afternoon, we returned to the Travellers Beach Hotel where we spent our last night in Mombasa.  We all hung out at the poolside and engaged in many deep conversations about life.